So excited that fundraising single “This Fine City” was released on Friday ~ a heartfelt, anthemic celebration of #Norwich that I have written especially for Future Radio featuring a whole host of talented friends and musicians: Ecky Limon from the Blue Joanna (name checked in the song!), Scott Mathieson, Andrew Todd (amazing production!), Owen Sennitt, Yve Mary B, Callum Morgan from Morganway, Chad Mason, Hannah White, Russell McNamara and Teresa Gibbon.
Thanks so much to all the talented friends and artists – including many Future volunteers – who were a part of this very special project. Huge thanks of course to all the hard working team at Future Radio.
Please listen, donate and share the Bandcamp link below – all funds raised from the single will help Future to relocate to a new home – let’s help them find a new studio!

Already been receiving lots of great press for the single. Was lovely to be Story of the Day at Folk Features – Uplifting stories for Norfolk and Suffolk, brought to you by Emma Outten:

So lovely that the song has already touched people and really resonated. Here’s a beautiful review from Richard Shashamane for his Norwich: Music City, UK Blog:

Immediately upon my first listening to this rousing celebration of Norwich and hope for the future I felt renewed optimism as well as being quite moved by the heartfelt love of the city so sincerely expressed in song. Joyous and triumphant in its hope.

There has also been some lovely BBC airplay for ‘This Fine City’ over the weekend! Thanks to BBC Music Introducing in Norfolk and BBC Music Introducing in Suffolk plus the single was played on Stephen Foster’s BBC Radio Norfolk and BBC Radio Suffolk show on the week from 6pm. Listen via BBC Sounds. I have been recording a few interviews including one with Good Health Radio in Australia. This will available on Monday October 19. I have also been doing some interviews for local television including That’s TV East – video here Also this Tuesday October 20 Ecky Limon and I talked about the single on ITN News Anglia and played a snippet of the song outside the Blue Joanna.

Been doing lots of radio interviews to promote the single and it was lovely to chat to David Eastaugh for arts and culture show Platform, all about the inspiration for the song. You can hear the interview at: https://futureradio.co.uk/futureplayer/mixcloudplayer/3632

As you know, I love to have my songs remixed and it’s been wonderful to work again with Neil Timbers who has done a brilliant electronic remix of ‘The Edge of Love’

Listen to the audio here on SoundCloud 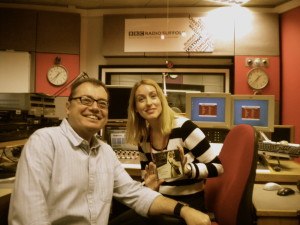 Photo from my live session and interview at BBC Radio Suffolk

Thanks to Stephen Foster for having me on his show. Ahead of my upcoming gig supporting Hazel O’Connor on Wednesday, which is sold out, my songs are being aired each evening this week between 6 and 7pm UK time! 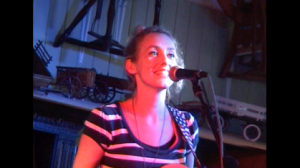 Excited to be doing a live session on Sue Marchant’s ‘Big Night In’ on BBC Radio Cambridgeshire, Norfolk, Essex, Suffolk and three counties at 9pm this Friday September 21st. I’ll be playing tracks from ‘Reminders’ and chatting to Sue about my career and upcoming homecoming headline at Bicycle Shop Norwich. Tune in if you can and there will also be a listen again link.

Thanks also to Concrete for this piece about the upcoming homecoming headline at The Bicycle Shop, Norwich.